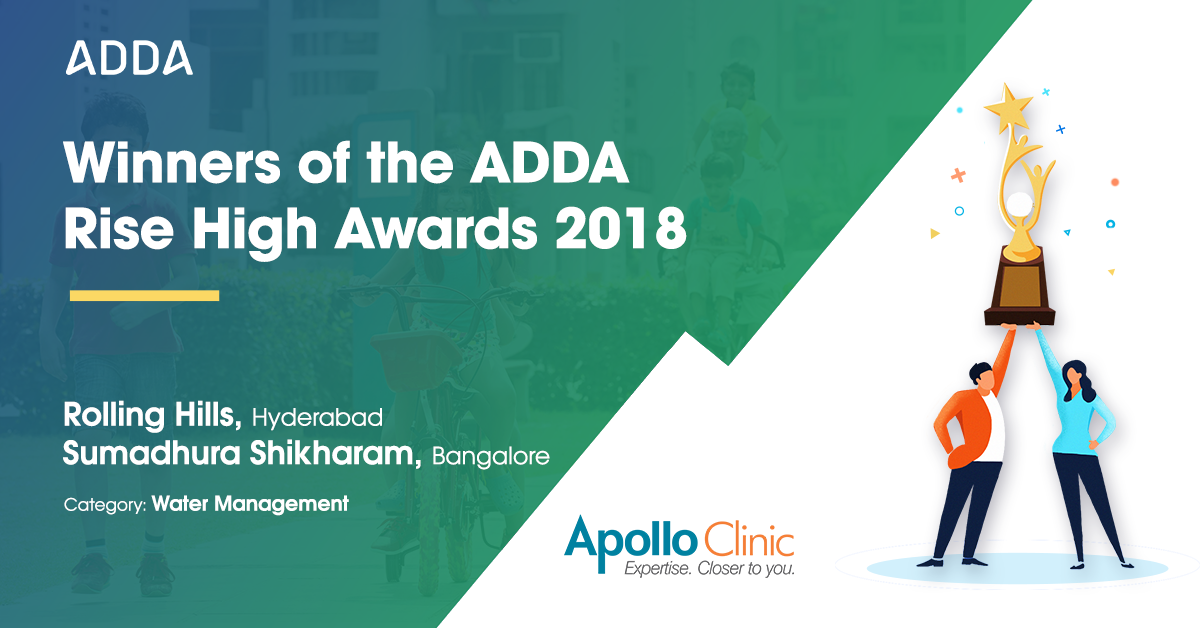 The final blog on the winners is here!

In today’s world Water is one the most important factors as the groundwater levels are depleting for several reasons which include both man-made and natural. The effect is visible the most in the heavily urbanized areas as the groundwater level is depleting fast and the cost of water is skyrocketing in Housing Societies. Water management is one of the most important aspects in all the gated communities and some of them have come out with some really inventive solutions regarding water management. Here are the stories of the of the most inventive and impactful winners under the category – Water Management.

Rolling Hills, Hyderabad has won their second Rise High Award, under the category water management. Due to undulations in the natural terrain of Rolling Hills, there was inequitable distribution of water, the overhead tanks were not getting filled. A number of water tankers were being ordered within the community resulting in lots of complaints and rants on residents’ WhatsApp group, meanwhile water overflowing from the sumps in some villas due to negligence and water leaks being left unattended leading to water loss. It was a pathetic situation.

Any solution starts with someone taking a stand, understanding existing system/processes, forming groups and educating the community about the same.

Firstly they shared current scenario with the community through ADDA notice and residents group. They also ran an ADDA poll to figure out the problems faced by the residents. They used the input to correlate with water lines and plot layout to differentiate between genuine issues of inequity and high usage of water.

Firstly they increased the water harvesting pits on the community roads from 2 to 14 to recharge the bores. Also installed inline pressure pump for equal water distribution. To address the issue of the overhead tank, they came up with a process with supervision to ensure the bores are switched on regularly at right intervals to fill water into the sump to the right level. From the sump, water is pumped into an overhead tank for a specific duration enough to fill to the top without overflowing – calibrated from experience. When water is released, a message is posted on the group informing the water release and release ending. So they also addressed the issue of transparency in communication on water release. ADDA helpdesk tickets acted as the right channel for members to raise official community/personal complaints to the Association and get updates.

Sumadhura Shikharam, like most of the communities in Bangalore, has been majorly dependent on Cauvery water for its drinking needs. All of us use the word  “Conservation” in our daily lives, but we don’t act on it as an individual. In this case, they were 400 individuals. The water consumption is approximately 200 Thousand Litres/day and it created dependency on 30-40  water tankers per day for drinking needs (cost up-to Rs.48000/day) & regular digging of existing borewells for common area water supply.

On September 2017, a group of active volunteers started a campaign to ensure the society is self-dependent of all its water needs & also set a right example for other apartments in the Kadugodi-Seegehalli area. They analysed current resources, like the number of borewells / Cauvery water connection / rainwater harvesting pits/reduction of water usage and finally concluded that mix of awareness and technology is the right solution. They took help from a startup, builders and administration to plan the campaign and create awareness.

They started with a 30 days campaign (door to door/notice boards / Social media/demo by the vendor / single point registration camp) to educate the residents on benefits of Aerators to be installed in Washroom / Kitchen tap. The foam-based Aerators reduces the water outflow from 10 – 12 Litres per Minute (LPM) to 3 LPM. This has helped in saving approximately 20 Litres/day per family, that is 7640 Litres/day. This helps to control the tap water by 60% and also reduces the burden to STP plants as comparably lesser water is treated in the plant.

To keep things interesting, they started posting the average water consumption details per family on weekly basis on the group to ensure greater participation & motivation to the others.

The team worked with the builder to increase Rainwater pits from 4 to 6 and increased pit diameter to 3 Feet in diameter & 12 Feet in depth. Also did routing changes to ensure ground level water is enriched to a greater extent and the bore well gets efficiently recharged. External outlet taps were connected to STP lines & labelled, which now mostly is used for washing, Housekeeping cleaning, Garbage Bins cleaning, gardening, etc.

They also held a plantation drive including neighbouring communities and Panchayat members, which now helps the soil in holding more water and keeps the water table intact.

Now, Sumadhura Shikharam community is proud to share that they are sustaining without even a single tanker in the society and overall groundwater consumption has reduced from 200K litre/day to approx. 130K litre/day.