Home Neighbourhoods of Tomorrow The Power of Five 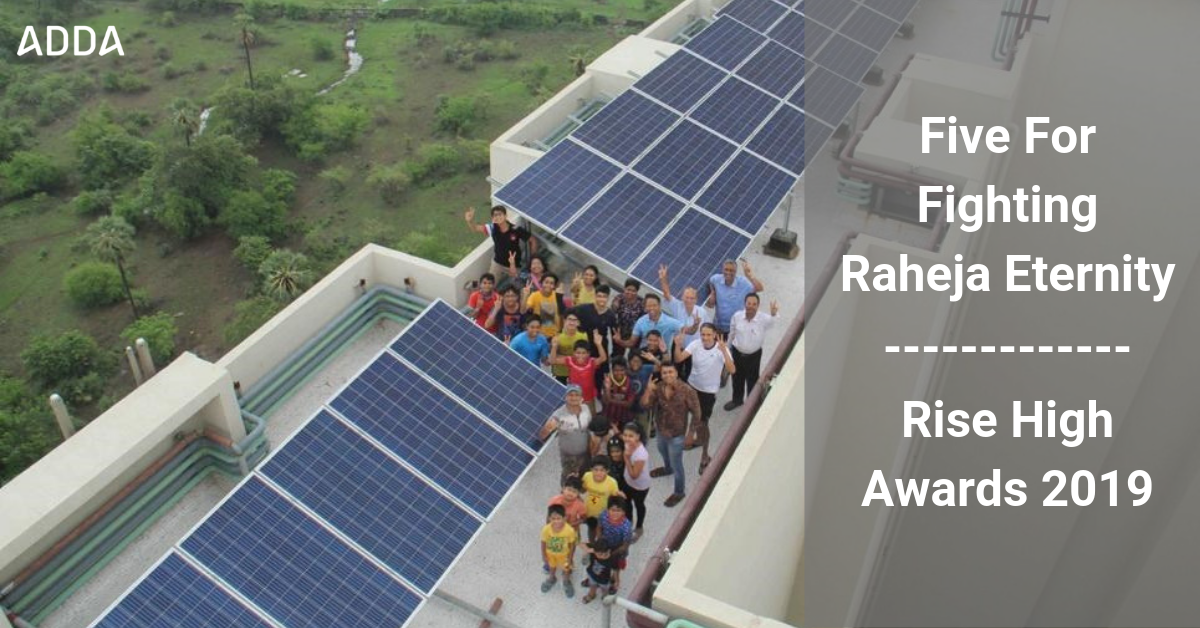 Raheja Eternity has been dedicatedly working to make their society sustainable and environment friendly since 2017. They have launched a three pronged attack to deal with the looming environmental crisis – depleting non renewable energy resources, water crisis and piling waste are the three target sections for Raheja Eternity. Before we know it, we will lose our fossil fuel to generate any kind of power. Our water resources are looking to exhaust themselves before we can utter Jack Robinson. Acres and acres of land are occupied with mountains of trash. Recently, Indore made history by clearing up 13 lakh tonnes of garbage from 100 acres of land.

Raheja Eternity displays that together, apartment communities can avoid contributing to this massive garbage dump.

The Whats and The Whys

Like most apartment communities, Raheja was struggling with their massive electricity bills. With bills eating into the lion’s chunk of their maintenance collection, they decided to implement solar power installation on the rooftop. With a 90 kW Rooftop Solar Project, the apartment community are well on their way to energy sustainability. The electrical consumption of a housing society with over 200 units is sizeable. With their solar power project in place, the society is saving hundreds of kilos of fossil fuel per year.

Just treating waste water is not enough to deal with our water crisis. Communities must have plans to reuse water to full potential. Following the philosophy of water budgeting, the residents have come forward together to implement projects to reuse waste water. Water budgeting is the principle of understanding that not all activities require the purest potable water and that a lot of our daily activities overuse water.

Following a well planned systematic step by step procedure to tackle their water problem, Raheja Eternity has even installed a rainwater harvesting set up. It is no new news that our rain water is undervalued and under used resource. Correctly harvesting rain water can solve water woes of every community while allowing time for the groundwater levels to recharge themselves.

Let’s face a simple fact. Landfills have done no good to anyone. Sending tonnes and tonnes of waste to the bins, only for them to be dumped in landfills is not conducive to the vision of a clean earth. With a proper garbage converter in place, Raheja’s waste gets treated and flawlessly separated into wet, dry and electronic waste.

Raheja Eternity’s path to achieving the status of a green community has been anything but smooth. Getting residents to unanimously agree to these long term projects was no easy task. It led to hardships in collecting funds for the projects. However, with regular education and proper awareness, the residents were brought on board, funds raised and maintenance of all projects streamlined.

There has been drastic reduction in electricity billings. Huge carbon dioxide emission could be controlled to bare minimum and water conservation could be made successful.