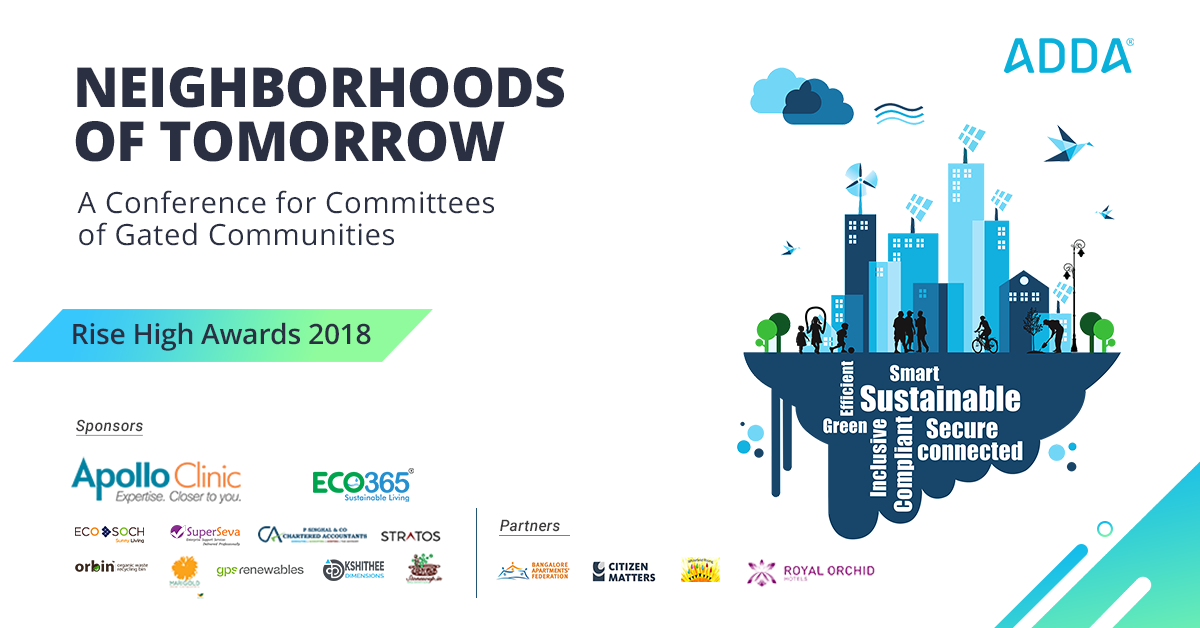 Neighborhoods of Tomorrow 2018, a signature event hosted by ADDA, was conducted on 8th of September at Hotel Royal Orchid.  It was a gathering of management committees, subject matter experts and city administration who discussed solutions to various neighborhood problems. It also celebrated management committee members who have come forward and implemented several initiatives for the betterment of their Apartment community as well as neighboring communities. 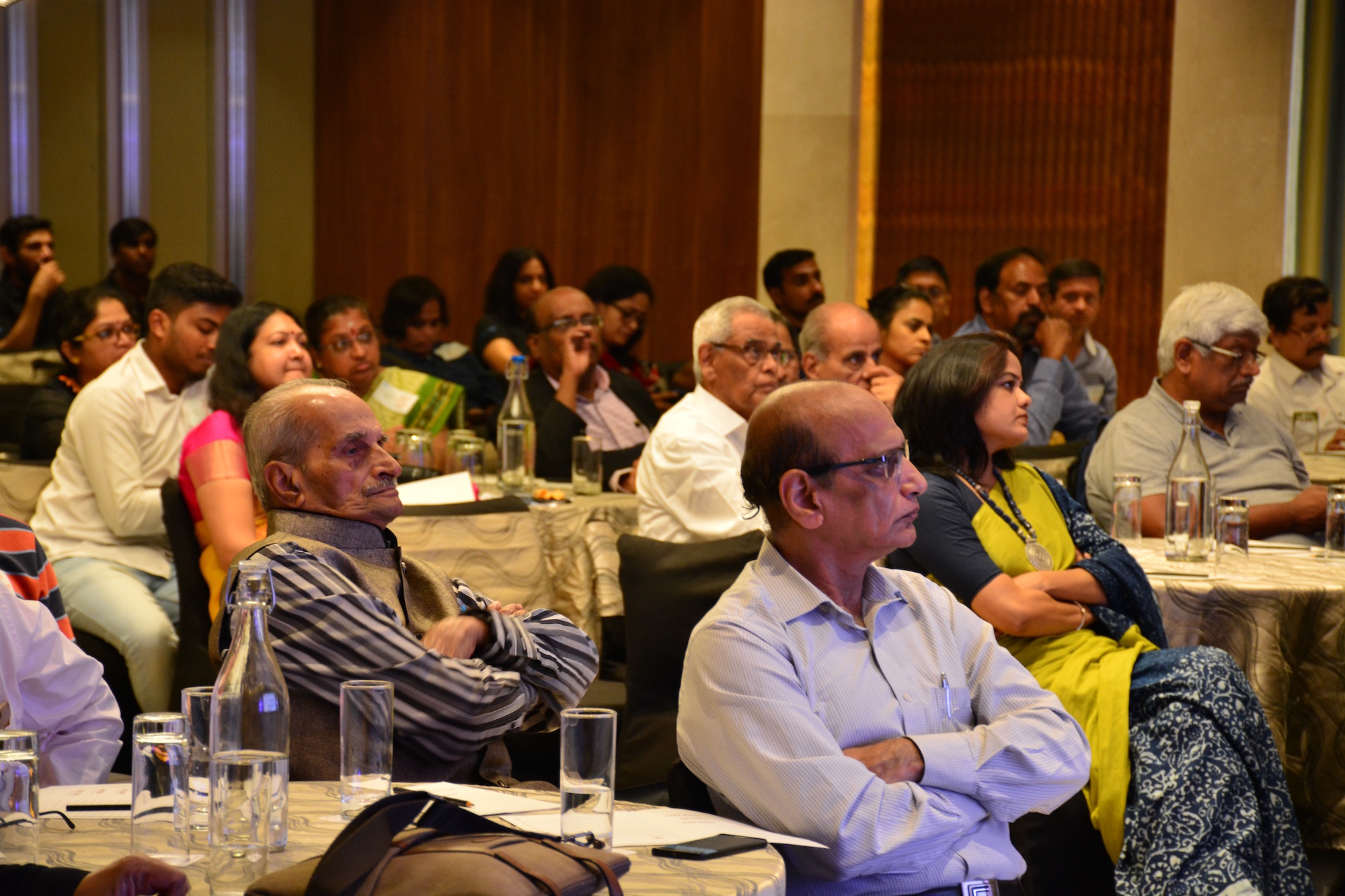 ADDA also presented, Rise High Awards, to celebrate management committees and residents, who volunteer their time and collaborated with vendors, local government etc. to implement outstanding Initiatives. Launched in 2014, the Rise High Awards are held every alternate year. It is the first and only Indian award that honours Gated Community initiatives. This was the 3rd Installment of this Award. 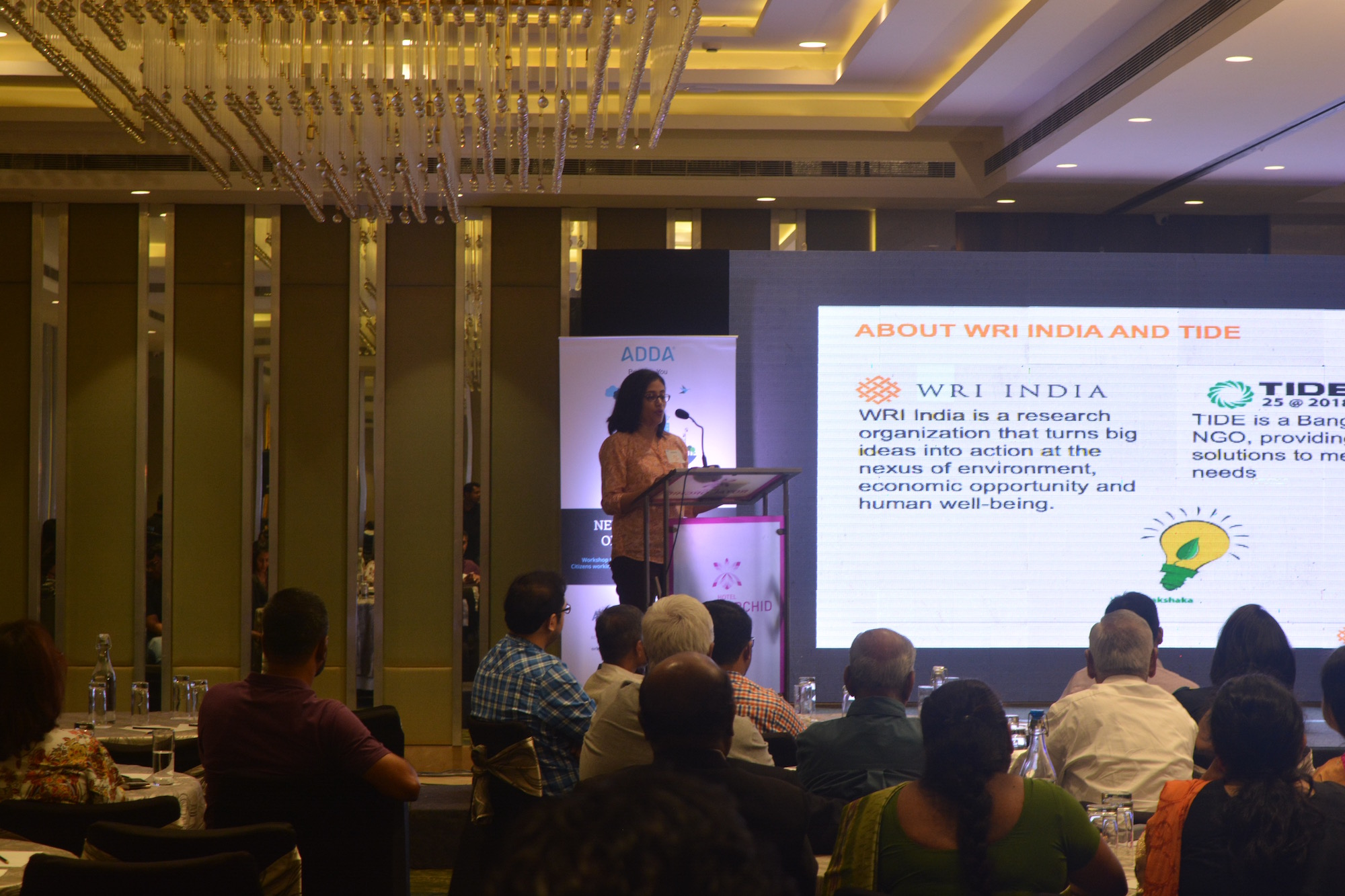 Ms Sumedha Malaviya from World Resources Institute spoke about energy usage in Apartment Complexes and ways of reducing this energy usage using sustainable methods. She also presented simple ways in which electricity costs can be brought down for common area energy consumption. 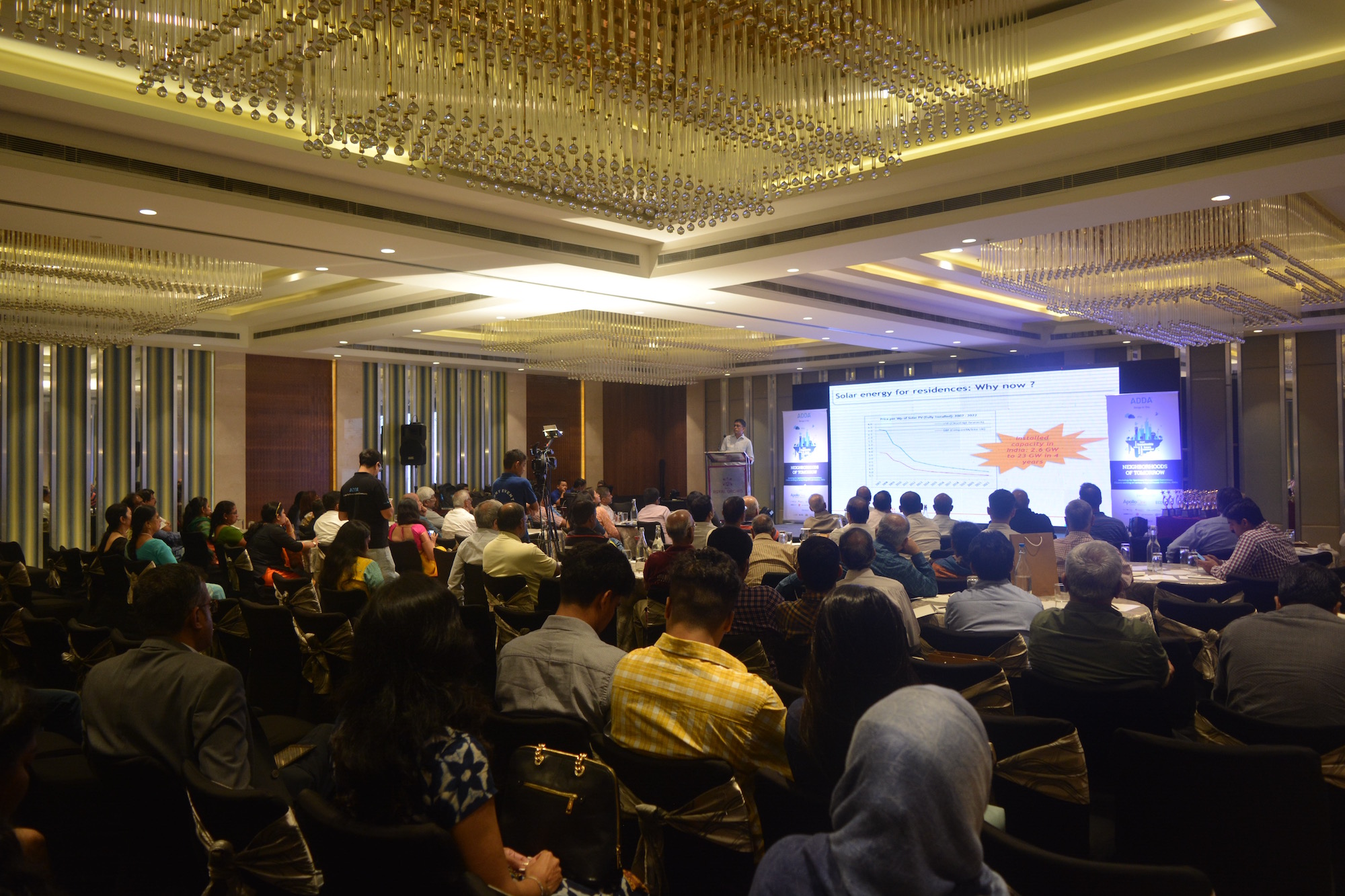 Mr Kazi Zaman from Sobha Petunia, Bangalore & Mr Ashok from World Resources Institute, spoke about how solar rooftops can be used as a way to reduce energy costs. Apartment Complexes typically has large un-utilized roof space which can be used for such installations. The system can also be integrated with existing systems making it easy to get started. Between 1996 and today, the cost of solar panels has fallen by almost 99%. Changes in regulations and improvement of technology have made it a very dependable source of power. Typically payback period is 5-6 years.

Mr Suryakanth Sahu, Raheja Eternity, Mumbai, winner of the Rise High Awards under the category Renewable energy spoke about solar rooftop initiatives implemented in his apartment complex. He explained how maintenance bills have come down to just 4000 per month from 18000 per month through these initiatives!

Mr. Nikhil Grover, from Brigade Petunia, also a winner of the Rise High Awards under the category Renewable energy spoke about their own solar installations. Theirs is the first apartment complex in Bangalore which runs close to 100% of their common usage energy requirements on solar saving trees equal to 2 Lalbagh’s!

The next set of sessions were on In-House Composting Options for Gated Communities.

Ms Savita Hiremath, a member of SWMRT, spoke about the background of composting, the different types of composting which can be done inside Apartment Complexes and the right methods to do it. She presented examples of several forward-thinking apartment complexes like Brigade Regency, one the first in Bangalore to do composting in-house. Rainbow Apartments, who are processing garbage for around 350+ homes with zero cost using innovative composting methods. She also mentioned, “Make your composting process-centric and not people-centric. Make everybody responsible for the process!”

Mr Satish Kini, from Matoshree’s Pearl CHS Ltd, Mumbai, winner of the Rise High Awards under the category waste management spoke about how they garnered consent and commitment of their residents for implementation of composting in their apartment complex. He mentioned, “The real issue is not technology or composting methods, the real issue is people’s mindset. What is important is communication. You have to make people know that you are doing something good. We conducted 7-8 awareness workshops. We had more than 120 residents, children, housekeeping staff who participated in the initiative.” 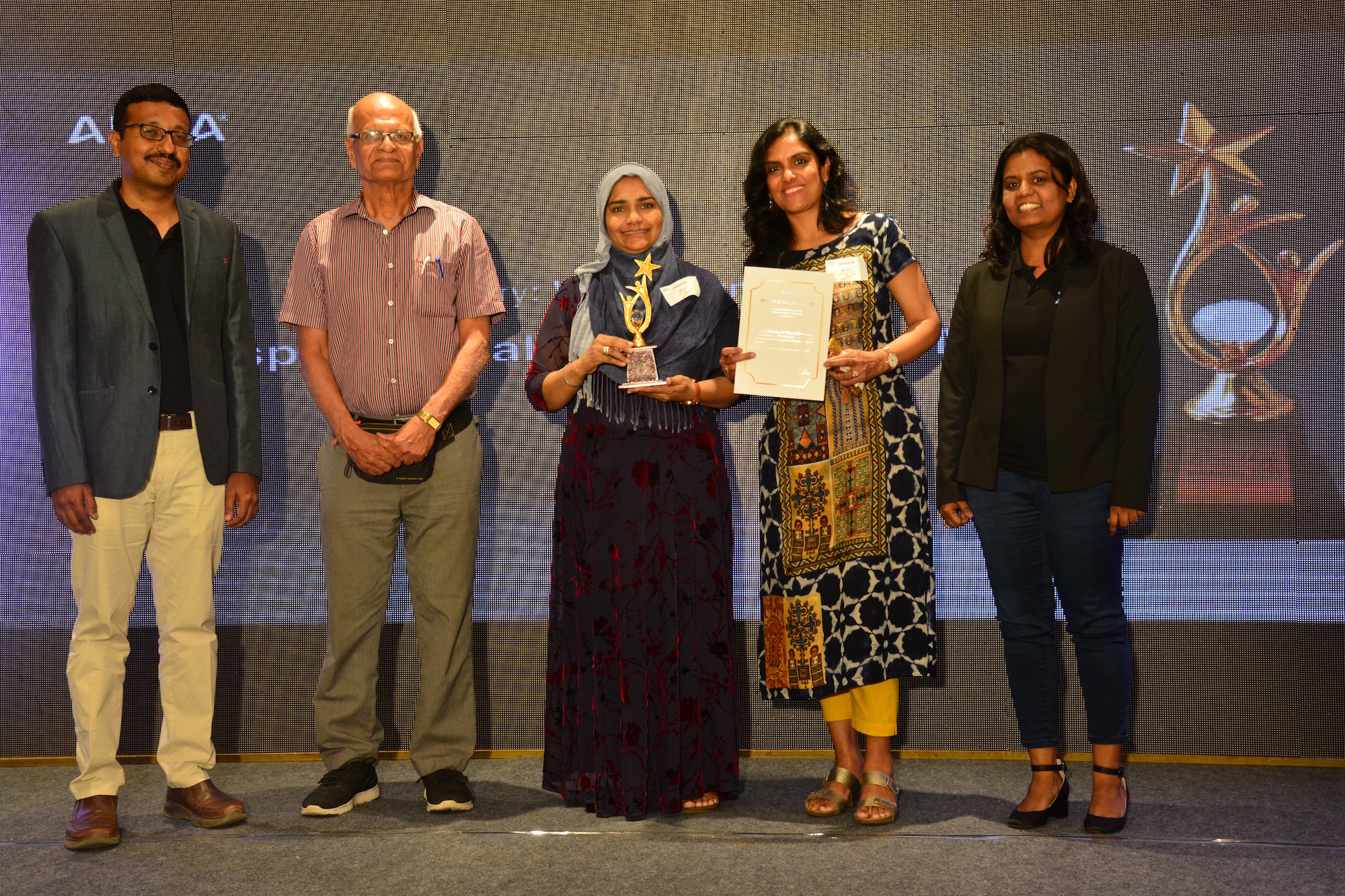 Representatives from Rise High Award winner for waste management, Whispering Palms XXclusive, Mumbai, mentioned that in their complex 300 kg of wet waste is generated every day. Using 2 bins and 1 bag approach with segregation at source, the training session for residents, housekeeping and security staff they have implemented a beautiful waste management system in their complex. They also mentioned that they do 32 types of dry waste segregation. 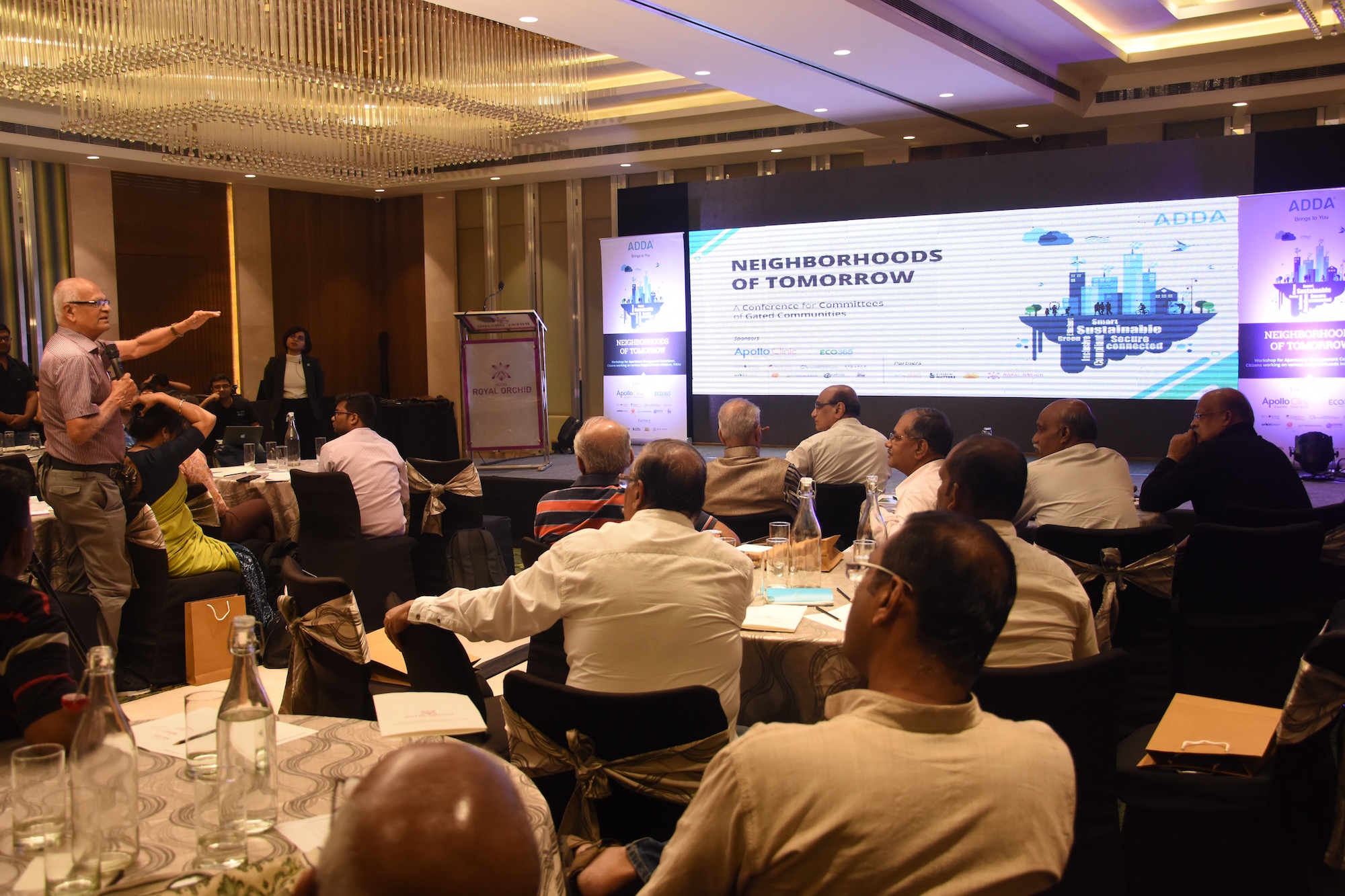 Taking the discussion forward, Mr N.S Ramakant, the founding member of SWMRT, a well-known figure in the field of waste management, spoke about various practical methods of reducing waste. One such idea was creating a plate bank,  where each resident can contribute one set of crockery. This can be rented and used by apartment dwellers, for parties, etc. and stop the waste of disposable plates and glasses.

Ms Devika, from Rolling Hills, Hyderabad, is a winner of the Rise High awards for 2 categories, Water Management, and Initiatives outside the gate. She mentioned how they came together and transformed a huge open waste dump area outside their gate into a lush green pasture and stopped sewage overflow free community roads. Also, talking about their novel water management initiatives she mentioned how Hundreds of tankers which used to be consumed was reduced to just around 60 tankers this summer. 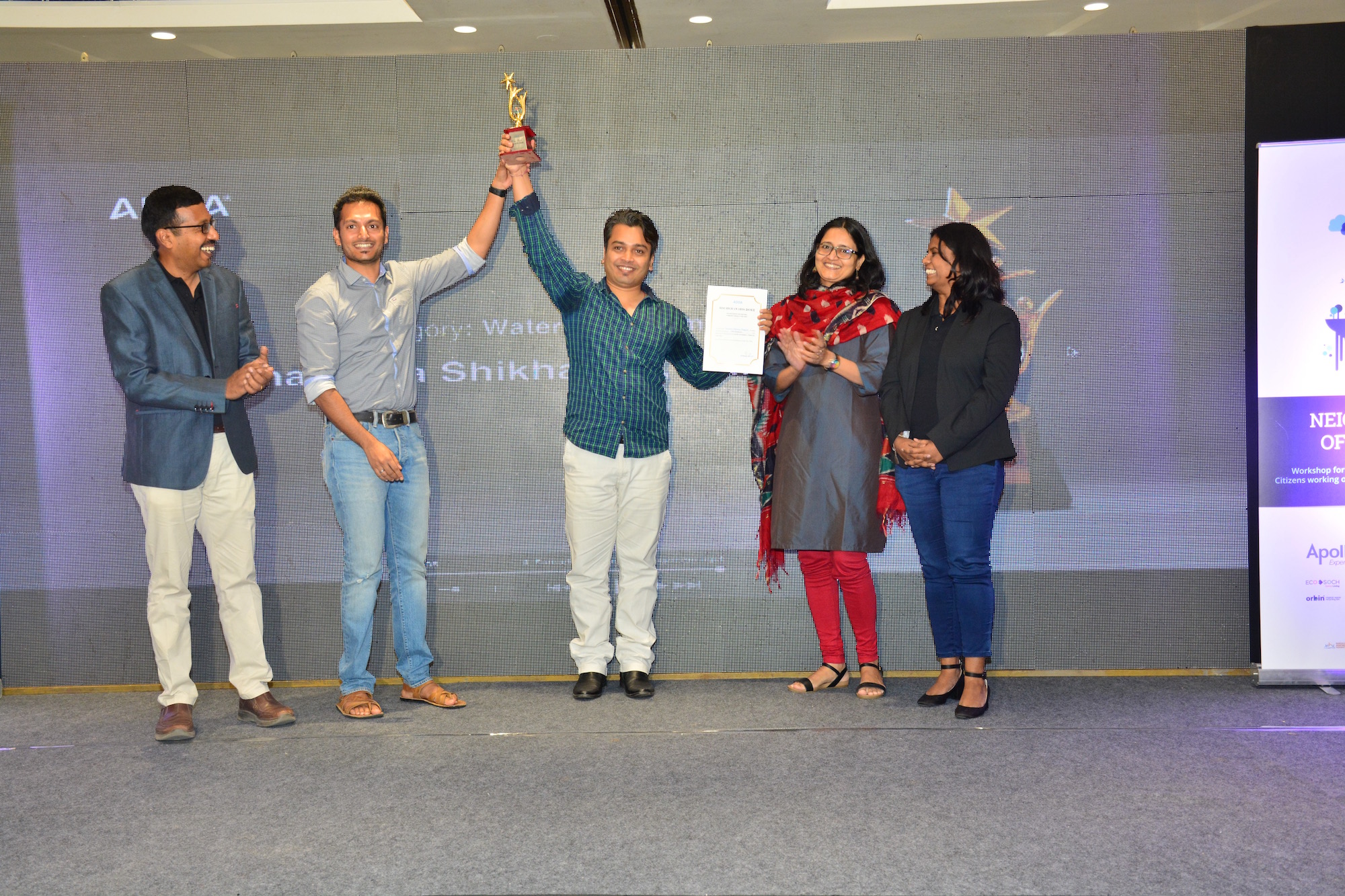 Mr Abishek Anand, from Sumadhura Shikharam, Bangalore, winner of the Rise High awards for water management talked about problems of water in East Bangalore. He talked about how through a door to door awareness campaigns with kids in the forefront has helped. Communication of water-related facts and issues, nozzles put on taps to reduce the water flow has brought down water consumption by around 50% and they are a zero tanker dependent society now.

From Oceanus Heights, Trivandrum, Mr Ramji spoke about how centralizing various activities like renting and selling out apartments, selling of newspapers, household articles helped them create a central fund for the association. This fund is given out as a bonus during the festive season – Onam. As a reciprocation of the gesture, the staff also contributed the bonus to the Kerala Flood relief Initiatives, along with residents this year.

“Health is the usually the last priority for domestic staff. But we took this as our first priority,” mentioned Dr Gadwe.

Both Oceanus heights and Shriram Spurthi are winners of the Rise High Awards under the category Domestic Staff Welfare.

One of the most awaited categories of the awards was the Builder- Association Collaborations won by Century Indus and Olety Landmark, Bangalore. 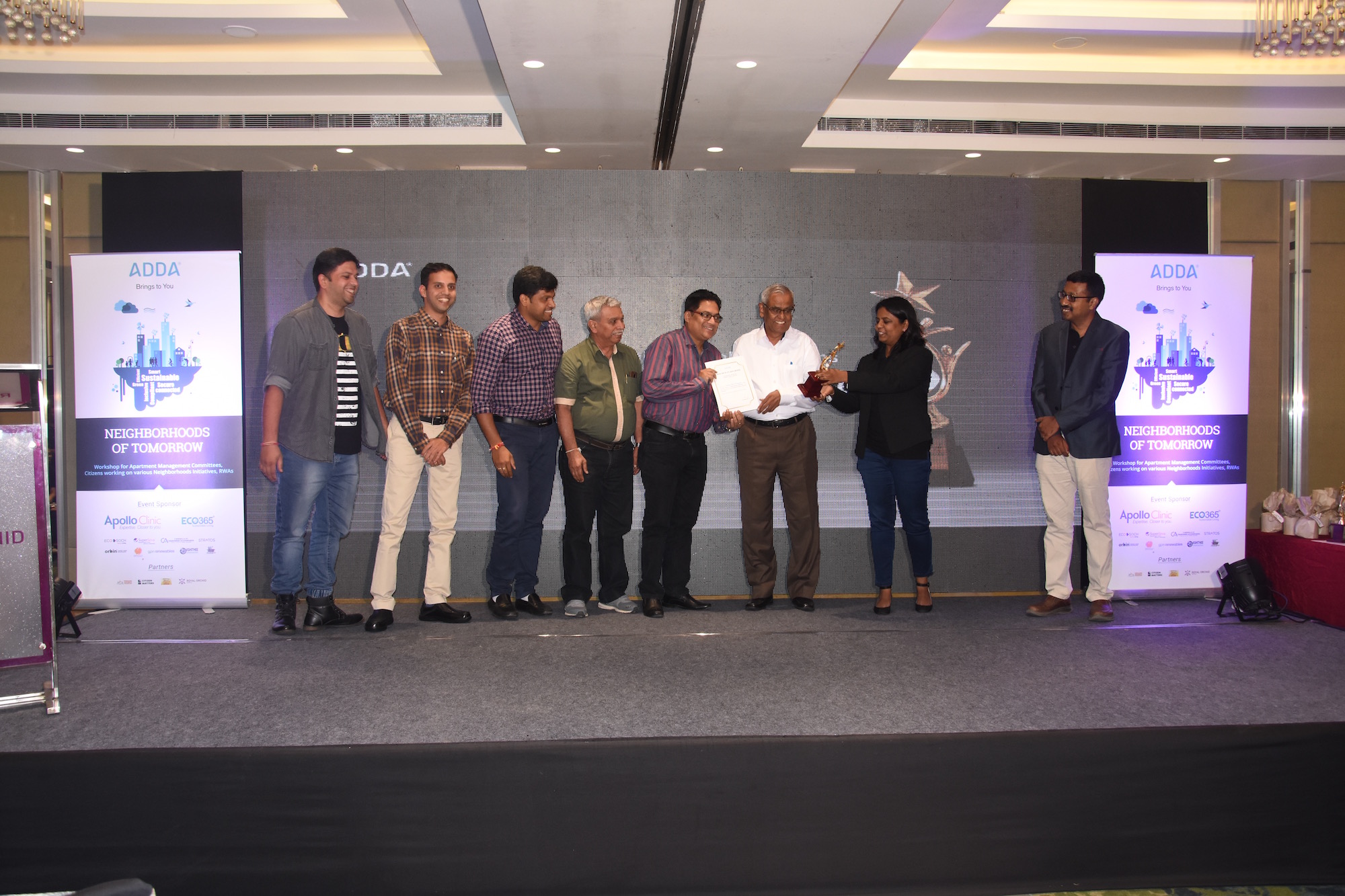 Mr Sandeep Pai, from Century Indus, explained how the management Committee worked together with Century Developers for various initiatives like getting transfer Khata, notices from DC and also the transfer of BESCOM individual ownership.  Also, the assistance to get Kaveri water, follow up on issues related to BESCOM, roads, etc. He also mentioned how ADDA helped their team in completely taking over financial management of operations and reciprocating to help from Builders. 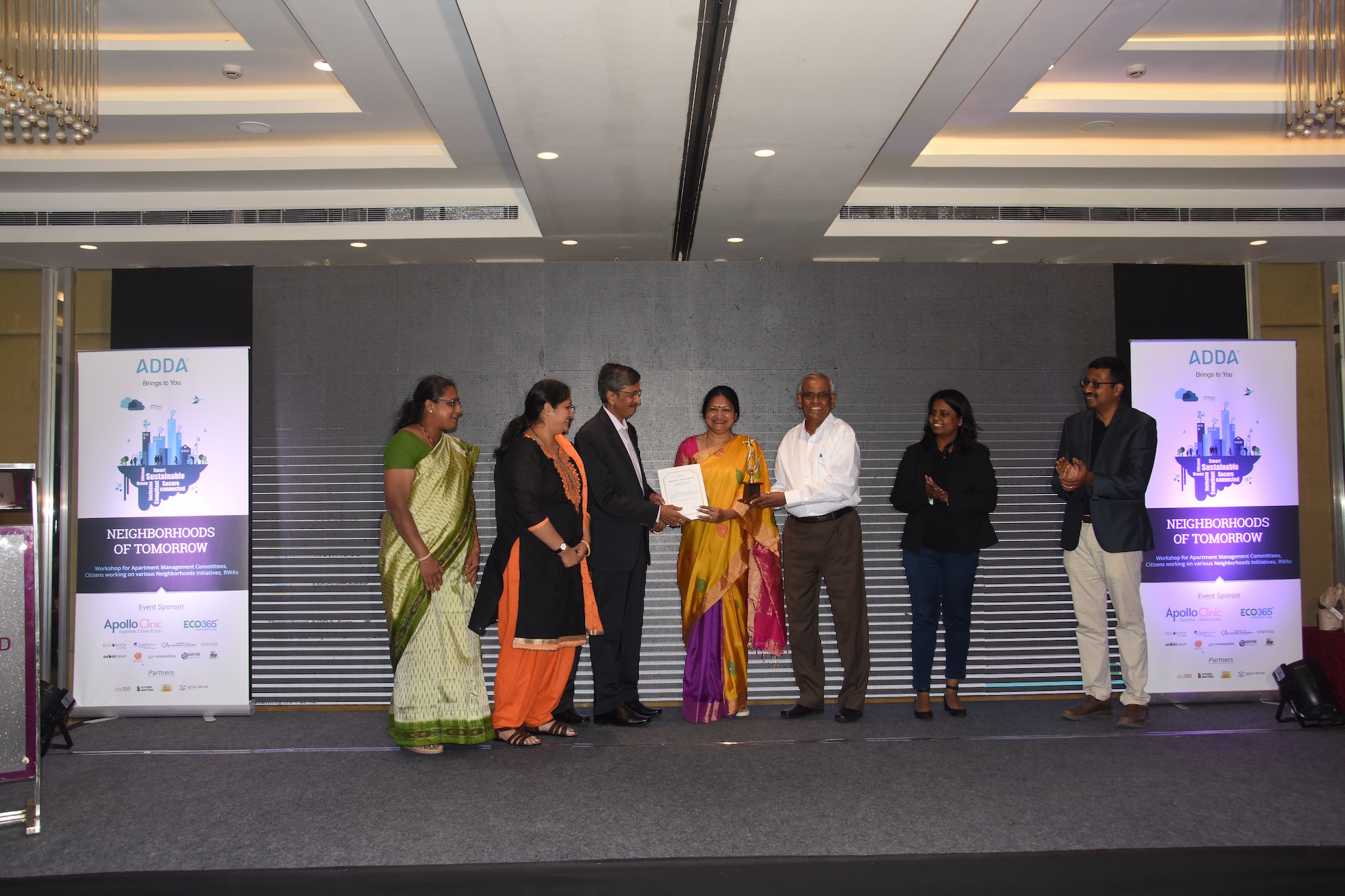 Sudha Sivashankar, from Olety Landmark, Bangalore mentioned that Olety Landmark is the baby of their Builder and they are taking care of the baby very well. She proudly mentioned how their’s is a very happy community which runs with close collaboration with the builder.

What followed was a very interactive and activity-filled session from Mr Kabir, from the Alliance of Indian Waste Pickers. Appreciating Bangalore as one of the very few cities in India, which sees a huge amount of diversity living harmoniously, he mentioned, “Cities are supposed to be melting pots. Migration into Bangalore is not a 5-year-old phenomenon. Homo Sapiens are migratory species. Since the time of Kempegowda people are migrating into Bangalore. Like we are sharing the planet, we are also sharing the city”.

The last session of the day was on Domestic Staff Welfare where a Proposed Code of Practice for Employers and Employees was discussed by Parijatha, member of Stree Jagrithi Samithi. Parijatha works very closely with Ms Geeta Menon, who is a very reputed activist in this area. She also mentioned she is extremely happy that first time in India, the topic Domestic Staff Welfare is brought to an open discussion among a group of people through ADDA.

The event was very inspiring and the attendees said they are looking forward to more events like this from ADDA.

View all Presentations from our Experts and Rise High Winners.